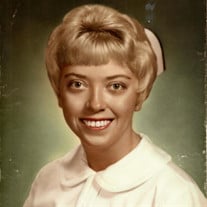 NORWAY- Randi “Hannah” W. Treves, age 73, of Norway, entered eternal life October 3, 2018 at her home, surrounded by her family. Randi was born in Blackpool, England on August 29, 1945 the daughter of the late Martin and Janet (Murgatroyd) Olsen. Randi graduated from Norway High School and proceeded to study nursing, graduating from Saint Luke’s Hospital Class of 1966 with her Bachelor of Science in Nursing, where Randi was voted “best sense of humor” amongst her peers. She spent her career working as a registered nurse in multiple different areas throughout Michigan. A dedicated member of the community, Randi spent her time in the Association of the 82nd Airborne, where she devoted a portion of her life to assisting in the care of soldiers overseas by sending over 10,000 care packages during her time as a member of the association. Due to her will to always help those who need it, Randi spent a great deal of time and worked tremendously to help those with disabilities in the area by advocating and fighting for those with special needs. Randi loved music and was a gifted pianist. She enjoyed playing for community social events, weddings, and for our veterans at the local hospital. She also played for several area churches, Bethany Lutheran Church of Norway and for nearly twenty years at St Barbara Church in Vulcan. Her musical talent was both beautiful and emotional. When she played Schubert's Ave Maria it could bring tears to your eyes. Randi married Roger J. Treves JR, the love of her life, on August 14, 1999. He preceded her in death on January 28, 2007 Randi is survived by her four daughters Bridget (Mike) Finn, Mary Margaret Racine, Rachelle (Jeff Goudreau) Cherette, all of Norway and Theresa (Donny) Peterson, of Iron Mountain; her two sons SFC Michael (Nikohl) Cherette of Clarksville, TN, and Christopher Racine of Provincetown, MA; grandchildren CPL Donny Houle, Brett John Houle, Joey Bourg, Cameron Gatien, Hailey and Lucas Cherette, Brett & Tori Finn, Jeremy (Ashley) Mack, Aria & Nora Peterson; a brother Rob (Linda Bassler) Olsen; a nephew Matthew Olsen; a great-nephew Miles Olsen; a great niece Matilda Olsen; and close friends Judy Lindquist and Wendy Ray. Per Randi’s request, there will be a graveside memorial on November 9, at 2 p.m. at the Norway Township Cemetery. In memory of Randi, please offer a seat at your dinner table for anyone in need. Goodbye, darling. "Forever and a Day"

The family of Randi W. Treves created this Life Tributes page to make it easy to share your memories.

Send flowers to the Treves family.