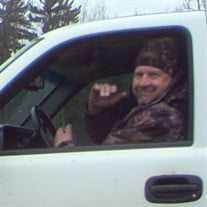 NORWAY- Raymond P. Bray age 67 of Norway, passed away while being comforted by his family and close friends Monday, March 18, 2019. He was born on February 9, 1952 in Norway, the son of the late Andrew and Ethel (Cronick) Bray. He was a 1970 graduate of Norway High School where he was an outstanding athlete lettering in all that he played. He went on to play football at Northern Michigan University for 4 years, where he earned his teaching degree in l974. Raymond was an avid outdoorsman who enjoyed hunting, fishing and trapping. Raymond poured his heart and soul into creating Bray’s Hunting Lodge, it was his happy place. He could always be found riding, checking cameras and building blinds. On his many hunting adventures, he always found great success bagging trophy bucks. He also captured a record setting Michigan bear while hunting in Hermansville. Raymond went on to teach for 33 years retiring from Norway High School, as the PE/Drivers Education teacher, where he passionately coached basketball and football. There, he was lucky enough to coach his own son Brett from the sidelines. He had a love for coaching that could never be denied. While at Norway High school he impacted many players throughout his years where he instilled a hard work ethic on and off the field or court. He believed in determination and digging deep when times were rough, to find a little more fight to get the job done, passing along a quote to his grandson, “Don’t ever let anybody tell you, you can’t, because you can.” He lived for playing, watching and coaching sports. He met his lifelong career goals: 40 years of coaching and 40 years of reffing. He enjoyed the past couple of years relaxing in the stands watching his grandson play high school sports. He still enjoyed running the classic “Gold Medal” basketball tournament where he was manager for 31 years meeting many great players along the way. Raymond was also loyal member of Plumbers & Pipe Fitters Union, Local 111 for 30 years. Raymond is survived by his wife: Sally, his children: Rae Anne (Kevin)Seat & grandson Zach. Brett (Alicia) Bray, Dominic & Sophia. Kylie Bray & granddaughter Graylynn. Step daughters: Kristin (Jason) & Gage Gendron, Amy (Evan) Broden. Brother Kenneth Bray, sister Pamela Hinds; mother-in-law Connie Secrist, sisters-in-law Debbie Secrist and Sherry Rose; brother-in-law Roger (Chris) Secrist; and several nieces and nephews; Special Buddy Harry Recla and many more great friends. He was preceded in death by both his parents, brothers Lupo Bray and Andrew Bray. Family will greet friends on Tuesday, March 26 from 4-7 p.m. at St. Barbara’s Church in Vulcan. A Memorial Mass will be celebrated on Tuesday at 7 p.m. at St. Barbara’s Church with Fr. Timothy Ekaitis officiating. May his legacy live on in the memories he created with so many. We will miss you “King Raym.” You will be forever in our hearts. The family will be establishing a memorial scholarship fund in Raymond’s name.

NORWAY- Raymond P. Bray age 67 of Norway, passed away while being comforted by his family and close friends Monday, March 18, 2019. He was born on February 9, 1952 in Norway, the son of the late Andrew and Ethel (Cronick) Bray. He was a 1970... View Obituary & Service Information

The family of Raymond Paul Bray created this Life Tributes page to make it easy to share your memories.

NORWAY- Raymond P. Bray age 67 of Norway, passed away while being...

Send flowers to the Bray family.