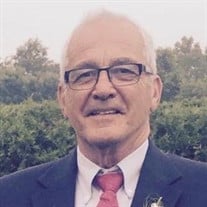 VULCAN - Richard “Dick” Raymond Bryson passed away Saturday, April 18, 2020 at ManorCare in Kingsford, Mich., surrounded by his loving family. Dick was born in Escanaba on Aug. 15 1936, the son of the late Lucille (Demars) and Raymond Bryson. He attended St. Joseph's High School and graduated in 1954. He was drafted into the Army in December 1959 and was discharged in April 1962 after having served overseas in Korea. Dick married the love of his life Margaret (Peggy) Munson on April 4, 1964, and together they raised four beautiful girls. He was employed as a foreman at Mead Paper for 30 years before he retired and built his retirement home at Hamilton Lakes. Dick was an active member of St Barbara's Church in Vulcan. He also served on the Hamilton Lake Association, including some years as the president, Hamilton Lakes Watershed Committee and St. Vincent De Paul. Dick enjoyed woodworking and had a workshop a master craftsman would love. Dick was always making things for loved ones including outdoor signs, jewelry boxes for all the ladies in his life, and Christmas gifts for his grandkids, which have become cherished memories for them. His girls will miss their dad making them a perfect copy of a piece of furniture they requested with just a photo. Dick had an enduring love for jazz music and has a collection of over 300 albums tucked away in his attic above his workshop. He always loved to tell the story of how he was on Rush Street in Chicago and got so close to Benny Goodman that he could see the spit running down his chin while he was playing. Most summer evenings he could be found sitting on his pontoon boat with his martini and listening to jazz music. His beloved pontoon boats are some of his most prized possessions starting with the first one he bought used, with pontoons made out of steel that he refurbished to its original glory. Many people enjoyed Captain Dick’s boat and jumped off the roof when it was floating in the middle of the lake. Dick’s family is deeply saddened that he will never see his favorite NFL team, the Detroit Lions, make it to the Super Bowl. Dick is survived by his daughters Betsy Morley of Traverse City, Heidi (Todd) Teafoe, Holly (Rod) Lovell and Jessica (Greg) Stewart, all of Vulcan, Mich. Dick also has six grandchildren, Sam (fiancée Sara) Morley, Madelyn Morley, Brooke (fiancée Bryce) Teafoe, Abby Adcox, Sierra Gonzales and Bryson Gonzales, and seven step-grandchildren, Courtney (Brian) Krabbe, Cole (Skylar) Teafoe, Ashley (Travis) Mattson, Adam Stewart, and Dustin Lovell Michael (Stephanie) Lovell, and Trevor (Megan) Lovell. And 11 step-great grandchildren. Dick is also survived by his sisters Sharon (Dave) Rivard and Debbie (John) Clairmont, both of Escanaba. Dick was preceded in death by his wife of 54 years Peggy, his son-in-law Daniel Morley and his parents Ray and Lou Bryson. Dick’s girls would like to thank ManorCare in Kingsford for the wonderful care and compassion of their father. A private family visitation will occur at Ortman Funeral Home in Norway, MI. Mass of Christian Burial will be celebrated on Tuesday, June 16 at 10 a.m. at St. Barbara’s Church in Vulcan with Fr. Timothy Ekaitis officiating. Interment will follow at the Spalding Cemetery with Military Honors. There will be a luncheon and a time for family to greet friends following the cemetery services at the Lake Mary Pavilion at Hamilton Lakes in Vulcan.

The family of Richard Bryson created this Life Tributes page to make it easy to share your memories.

Send flowers to the Bryson family.