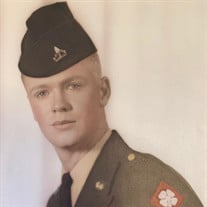 GRANITE BLUFF- Richard A. Wenzel 71 of Granite Bluff died Saturday, June 8th, at Oscar G. Johnson VA Medical Center in Iron Mountain. He was born September 29, 1947 in Norway Michigan, the son of the late Lee and Betty (Swanson) Wenzel. Richard graduated from Norway High School in 1965. He worked for the Niagara paper mill for 33 years starting as a plant laborer and retired as the assistant pulpmill superintendent. He was very proud to serve in the United States Army from 1966 to 1968. He served as a demolition specialist in the Republic of South Vietnam. He was honorably discharged as Specialist E5. ​Richard enjoyed spending time with his family, especially his grandchildren. He also enjoyed trout fishing, hunting, woodworking, coffee and being in the woods. His favorite kind of ice cream was Lots. He rooted for all Michigan sports’ teams and any team playing against the Packers. ​He is survived by his loving wife of 49 years, Debby; four children, Leigh Ann Dighera of Kingsford, Tim (Sarah) Wenzel of Granite Bluff, Sarah Bates of Appleton, Matt Wenzel of Negaunee; seven grandchildren, Kate, Grant, Morgan, Jane, Claire, Lydia and Jack; one sister, Noreen Christesen of Kingsford, one brother Ronald Wenzel of Norway; close nephew Tom (Deanna) Christesen of Granite Bluff; many other nieces and nephews; and a sassy black lab, Stella. In addition to his parents he is preceded in death by his brother James “Boots” Wenzel Jr. Visitation will be held Wednesday June 12, 2019, at Ortman Funeral Home from 10am until the time of the funeral service at 1pm. Interment will be held in the Norway Township Cemetery.

The family of Richard A. Wenzel created this Life Tributes page to make it easy to share your memories.

Send flowers to the Wenzel family.