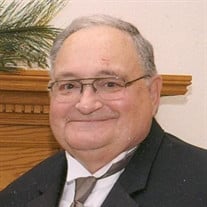 VULCAN — Robert I. Belanger passed away May 18, 2020, at the age of 76 at Marquette General Health System. Robert “Bob” was born in Hermansville on March 30, 1944, son of the late John and Florence (Gibour) Belanger of Hermansville. Bob was a 1962 graduate of Hermansville High School and a 1991 graduate of the Oakland Police Academy where he was fondly labeled “Old Man Yooper” by his much younger, college aged, classmates. He married Marie Flessati on June 29, 1963, at St. Barbara’s Church in Vulcan. Bob worked for Allis Chambers in Waukegan Illinois, the Iron Mountain News, the Dickinson County Road Commission, and the City of Norway Fire and Police Departments. He worked for the City of Norway fire and police departments for 24 years before retiring from the police department in December of 1997. Bob was a member of St. Barbara’s Catholic Church in Vulcan. He enjoyed collecting model trains, hunting, motorcycle riding, riding his side by side, tinkering with his tractor and spending time with his wife at their home on Hamilton Lakes. Bob is survived by his wife, Marie of 57 years; son, Dan Belanger (Lisa Lindt) of Lombard Illinois, daughter, Jean Belanger (Bill Polazzo) of Hamilton Lakes, daughter, Kathy Belanger of Norway; grandsons, Nickolas Belanger (Nicole), and Samuel Belanger; mother-in-law, Laura Flessati; a brother, John Belanger of Kenosha Wisconsin, and many nieces, nephews and cousins. In addition to his parents, he was preceded in death by his brother, Larry Belanger, his father-in-law, Joseph Flessati, and a sister-in-law, Rita Belanger. The Belanger family would like to thank the medical staffs at Dickinson County Healthcare System and the UP Health System of Marquette for caring for Bob after his fall. Visitation will be held on Saturday, May 30 from 9-10 a.m. at St. Barbara’s Church in Vulcan. The Mass of Christian Burial will be celebrated on Saturday at 10 a.m. at St. Barbara’s Church with Fr. Timothy Ekaitis officiating. Interment will follow at the Norway Township Cemetery.

The family of Robert Belanger created this Life Tributes page to make it easy to share your memories.

Send flowers to the Belanger family.