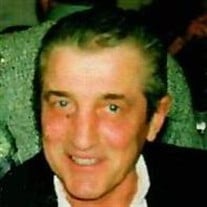 VULCAN- Robert James “Hammer” Varda age 74 of Vulcan, died Friday, February 22, 2019 at his home in Vulcan. He was born on January 15, 1945 in Norway, the son of the late Henry and Henrietta (Richards) Varda. Jim graduated from Vulcan High School in 1964 and served 22 years as part of the Michigan National Guard. Jim grew up on a farm and continued to run a hobby farm deep into his adult life. He started working for Western Electric in 1965 before finding a career at the Dickinson County Road Commission in 1970. Jim enjoyed his time at the Dickinson County Road Commission, an experience that lasted the next 37 years when he retired as Superintendent in 2007. Although officially retired, you may have spotted Jim plowing snow for the county until last year, 2018. He loved to help out. Jim spoke highly of all his past work adventures, his friends and the experiences he had along the way. Jim believed in helping his community and was very active. He proudly volunteered for the Norway Fire Department for over 40 years, he was on the Dickinson County Fair board, and a member of the Hall-DeWinter Post #145, American Legion. Jim was committed to everything he participated in. He could fix almost anything, and he often used that gift to help others. If you knew Jim, you loved Jim. You also quickly understood what hard work is and why lending a helping hand to those that needed it was so important. Jim didn’t need to say it but instead displayed it as he lived a life of gratitude and respect for others. Jim had a great big smile and an even bigger heart dedicated to loving his family. He spent most summers camping with his wife Kathy, family and friends. He was the perfect guy to sit around a campfire with. Jim always had a great story to tell. Jim loved his pets especially his little dog(s). You would often see Jim driving with his little dog by his side as he passed through town. They were a big part of his daily life. He enjoyed cutting wood, hunting, and playing cards. He was a devoted Green Bay Packers fan and didn’t miss a NASCAR race. He even coached baseball for many years. Jim loved family get togethers. One thing he never missed was going out for breakfast on a Saturday or Sunday morning with his son and grandson and anyone else who was available. Jim loved his family and his family loved their father, papa and husband. Jim is survived by his wife Kathy; sons Dean Varda and Neil (Danielle) Varda both of Vulcan; daughters Pam (Mike) Mahoney of Australia, Karen (Joe) Smith of Iron Mountain and Shenan (Colin) Kernen of Iola, WI; grandchildren Sadie (Tony), Alex, Hailey, Nick, Lauren, Zach, Danika, Cameron, Matina, India and Wyatt; great grandson Gracin; brother Justin (Sally) Varda of Vulcan; sisters Lorraine (Phil) Hagedorn and Jean (Paul) Betters both of Milwaukee; sister-in-law Rose Varda of Milwaukee; many nieces and nephews. He was preceded in death by his brother Hank Varda. Family will greet friends on Tuesday, March 5 from 3-7 p.m. at the Ortman Funeral Home in Norway. A Memorial Service will take place at 7 p.m. at the Ortman Funeral Home with Fr. Timothy Ekaitis, pastor of St. Mary’s Church officiating.

The family of Robert James Varda created this Life Tributes page to make it easy to share your memories.

Send flowers to the Varda family.