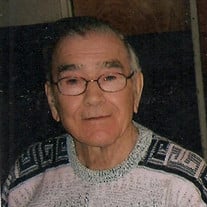 IRON MOUNTAIN- Robert Nigel White age 91, of Iron Mountain, passed away on Saturday, December 12, 2015, at Jacobetti Home for Veterans in Marquette, Michigan. He was born on August 31, 1924 in Norway, the son of the late James and Bessie (Osborne) White. Three days after graduating from Norway High School, he was drafted into the U.S. Army and was assigned to the 85th Mountain Infantry Regiment of the 10th Mountain Division. Bob served as a machine gunner on the frontline positions throughout the Italian campaign and received the Bronze Star. After the War in 1946, he married Grayce Heupel, his high school sweetheart, on May 11, 1946 at 1st Baptist Church in Norway. They made their home in Quinnesec and had three children. Grayce preceded him in death on November 7, 2010. Bob worked at the Niagara Paper Mill for 40 years, in his spare time Bob built four houses in Quinnesec. He also enjoyed hunting, fishing, and gardening. After retiring in 1986 Bob and Grayce built their dream home on Moon Lake and enjoyed many good years of retirement with a total of 65 years of marriage. Bob and Grayce are once again reunited in Heaven with their Lord and Savior Jesus Christ. Robert is survived by his children Patricia (Michael) Berg of Mechanicsville, VA, Dennis (Deborah) White of Iron Mountain and Jeff (Carol) White of Trabuco Canyon, CA; grandchildren Aaron and Brian (Jennifer) Berg both of Virginia, Kevin and Rachel White of California and Jennifer (James) Harper of Marinette, WI; great grandson Eric Berg of Virginia; brothers-in-law Paul (Barbara) Heupel of Kingsford and David (Darlene) Heupel of Quinnesec; many nieces and nephews. He was preceded in death by his brothers Louis and Clarence White and sisters Beryl and Gladys. Visitation will be held on Friday, December 18 from 11-1 p.m. at the Evangelical Covenant Church in Norway. Funeral Services will be held on Friday, at 1 p.m. at the Evangelical Covenant Church, with Rev. James Danielson, pastor of Evangelical Covenant Church, officiating. Interment will be held at the Norway Township Cemetery. Family would like to thank the staff at the Oscar G. Johnson VA Medical Center in Iron Mountain and the Jacobetti Home for Veterans in Marquette for their excellent care of our father.

IRON MOUNTAIN- Robert Nigel White age 91, of Iron Mountain, passed away on Saturday, December 12, 2015, at Jacobetti Home for Veterans in Marquette, Michigan. He was born on August 31, 1924 in Norway, the son of the late James and Bessie (Osborne)... View Obituary & Service Information

The family of Robert Nigel White created this Life Tributes page to make it easy to share your memories.

Send flowers to the White family.