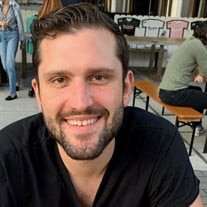 LONG ISLAND CITY, NY -Ryan Michael Pfeiffer age 29, of Long Island City, NYC, died unexpectedly on May 7th, 2021. Ryan was born in Iron Mountain, Michigan in 1992. A sweet and mischievous child, “Ryanocerous’s” natural curiosity was often displayed when the household would erupt in tears after he had secretly dissected his siblings’ toys to see how they worked. However; as an adult, this curiosity, mixed with his patient, meticulous nature, helped him figure out how to fix our cell phones…all is forgiven. Ryan grew up on the farm in Faithorn, and in the woods of Waucedah. As a son, he cherished time spent with his parents. He loved hunting and fishing, endless hours with his dad Mike, Grandpa Clippy, and dad Tom, and he respected the deep discussions he had with his mom, Jeri. He was incredibly thoughtful. Arriving home to a note from Ryan or a package with things tailored specifically to you were just part of having Ryan as a son, brother, or friend. As a sibling, we all agree that he was the best one. We looked up to his maturity and he was the one we all turned to for advice. His calm approach often melted away the usual sibling tensions. He’d say, “just relax” using an inflection and tone only he used. With a quick squeeze on the top of your shoulders, everything was then alright. His loyalty as a brother was ultimate. He made us feel like we were his only priority. As a friend, “Pfeif” established amazing relationships growing up and had a devoted, tight group of friends who have remained close. Memories flood our mind of “Ry” and his friends filling camp with music, fun, and all the things we hid from our parents. Ryan graduated from Norway High School in 2010. He was so loved as a student and classmate. He was kind and warm, making people feel special and heard. He was a patient listener and non-judgmental. He had a way of acknowledging people and was able to meet them where they were at. He was fascinated by peoples’ different perspectives on an idea or approach to a subject. He was incredibly deep, smart, and would spend hours talking about music, movies, or something he had read. After high school, Ryan started college at Central Michigan University but then transferred to Ferris State University to complete his degree in Nuclear Medicine Technology. He landed a competitive job at University of Michigan Hospital in Ann Arbor and matured successfully into adulthood over the next few years. In Ann Arbor, some of his mischievous nature showed through again. He was always fixing things and selling them on Craigslist for a profit. When we questioned the comings and goings of boxes on the porch, he would just flash his beautiful crooked smile and keep on hustlin’. While in Ann Arbor, he met his love, Ana Alas, and they took off exploring this world. Traveling to Dubai, Amsterdam, Paris, Jamaica, Turkey, and flying all over the US to visit friends and family, their life was full of energy, food, good IPAs, and music. Ana’s “Ry Guy” took his adventure to New York City last year to be with her after a year of distance while he was still working in Ann Arbor. Ryan recognized his match in Ana very early on. His devotion and love for her let their relationship thrive even though they were temporarily apart. Ryan landed another highly sought position with Siemens Healthcare as a Nuclear Medicine Flex Force & Clinical Education Specialist and was wholly invested in refining his new role. As a couple, Ryan and Ana spent their time exploring their new city, making new friends, and bringing their families together. Ryan proposed to Ana in December while visiting her family in Dubai, a family who loved him deeply and who will forever consider him a son and brother. The Alas family adored their “el guapíto.” Ryan is survived by his loving fiancé Ana and her parents Antonio and Guadalupe Alas, his parents Jeri and Thomas Renier, Mike and Cindy Pfeiffer, “sibs” Kayla and Mark Kolbe, Ellary and Jeff Gallino, and Thomas Renier JR; new siblings Maria and Roberto Alas; Grandparents Francis “Butch” Pfeiffer, Clifford Renier, Joe and Sandy Hartl, Beverly Opolka, and great-grandfather Don LaLonde. He leaves his nephews AJ, Ashton, Maximilian and niece Quinn. He also had many aunts, uncles, cousins, and countless loyal friends who he considered family. He was preceded in death by his grandmothers Beverly Pfeiffer and Gloria Renier, great-grandmother Miriam LaLonde, and grandfather Gerald Robertson. As a family, we are broken and devastated by the loss of our brother, son, uncle, grandson, and life partner. We hope that the wonderful memories we have of his smile, particular mannerisms, voice, and laugh will somehow carry us through this incredible pain. Visitation will be held on Monday, May 17 from 9:30 to 11:30 a.m. at the Ortman Funeral Home in Norway. A Funeral Mass will be celebrated on Monday at 12 p.m. at St. Barbara’s Church in Vulcan, with Fr. Michael Kowalewski officiating.

The family of Ryan Pfeiffer created this Life Tributes page to make it easy to share your memories.

Send flowers to the Pfeiffer family.