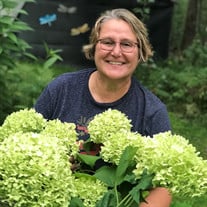 VULCAN — Sara Jo Thoune, 58, of Vulcan was called to eternal peace on Friday, March 27, 2020. Sara had a very rare form of lung cancer called ROS 1. She was born July 25, 1961, in Menominee,. She was the daughter of Therese and Glenn Thoune, and was the eighth of nine children. She graduated from Powers, Class of 1979, and went on to receive her LPN at Bay de Doc College in 1981. After college, Sara went on to travel the country working as a nurse. Sara had a very adventurous spirit, a trait she instilled in her children. Sara was very curious about the world and her spirit led her to travels throughout the states. Sara eventually found her way home and married Clay Kiser on Dec. 29, 1993. They went on to have two daughters, Clara Rose Kiser on Sept. 25, 1993 and Renae Rose Kiser on June 12. 1999. They were the loves of her life, and Sara said they were the best thing to ever happen to her. Sara was delighted to see their spark for life and adventurous spirits and was so very proud of them. Sara was also a proud dog grandma to three dogs, and an all around animal lover having hobby farms for her girls as they grew. Sara traveled extensively with her children, as a form of education and culture. Sara went back to college to receive her RN degree, graduating from Bay de Noc in December of 2009. She was very proud to serve our Veterans and worked at the VAMC in Iron Mountain and her passion was focused on hospice. Her illness forced retirement in 2018. Sara lived life to the fullest, with no regrets. Her passions were too numerous to mention. She turned hobbies into education experiences. Sara was an advanced mycologist, labeled “the morel queen” and even featured on 906 discovering TV show. She loved nature and her flower gardens, especially her tulips and peonies. She loved canning fresh food from the garden, winning numerous blue ribbons at county fairs for flowers, canned goods, and photography. Her most recent educational adventure was bee keeping. Sara was very resourceful, outgoing and made friends easily. She had too many to mention, but her memory will live on in their hearts. Sara leaves behind her loving children, Clara and Renae Kiser, and the father of her children Clay Kiser; siblings, Robert Welsh of Bosie, Idaho, Charles (Carolyn) of Gladstone, Gary (Elizabeth) of Crivitz, Wis., Richard (Sharon) of Jackson, Mich., Monica Thoune of Powers,, MeeSu Thoune of Appleton, Wis., Paul (Pam) Thoune of Ravenna, Mich. and Jennifer (Paul) Smith of Lake Zurich, Ill., and numerous nieces and nephews but was very close with her niece, Darci Thoune (Peyton Bentley) of La Crosse, Wis., and very special friends, Jill Welty, Cathy LeBeau, and Pam Foland. She joined those who went to eternal peace before her, including her parents; brother, Michael Thoune; nephew, Wesley Thoune; brother-in-law, Scott “Fats” Kiser; and her grand-dog, Lila Mae. Per Sara’s request, there will be no services. Condolences may be sent to the Sara Thoune Memorial fund at the U.P. State Credit Union, at 601 West U.S. 2, Norway, MI, 49870. The family wishes to thank everyone during this difficult time and would like them to remember their mothers motto; “Do what you can, with what you have, where you are.”

The family of Sara Jo Thoune created this Life Tributes page to make it easy to share your memories.

Send flowers to the Thoune family.