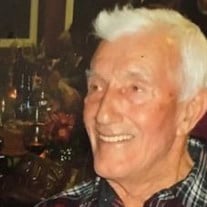 FAITHORN- Stanley “Slip” Carl Carlson, age 96, died on March 15, 2018 at the Oscar G. Johnson VA Hospital in Iron Mountain, MI. He was born in Faithorn, MI on November 30, 1921, son of the late Tycko and Mary (Isaccson) Carlson and lived almost his entire life in Faithorn. Slip graduated from Hermansville High School in 1938, worked in Chicago before answering the country’s call to serve in WWII. As a member of the 1st Engineer Combat Battalion, he fought in three amphibious landing battles in North Africa, Sicily, and the D-Day invasion at Normandy, Omaha Beach, as well as the Hurtgen Forest in Germany. “I spent my 21st birthday crawling across the desert in North Africa with my rifle,” Slip reminisced. For his service, he received five Bronze Stars, a Purple Heart Medal, and a Distinguished Unit Badge. He married Bethel Reid at the Faithorn Methodist Church on December 28, 1948. They raised eight daughters, first in Vulcan, and then moved to a farm in Faithorn in 1961. Slip worked at the VA Hospital for 27 years, primarily as a boiler plant operator. While working full time, Slip, with his wife as his partner, raised animals and grew a large vegetable garden on the beloved Carlson Farm. After retirement, they traveled the U.S, but were always ready to return home to the Upper Peninsula, “God’s Country.” Slip was a member of the American Legion, lifetime member of the VFW, DAV, and the First Infantry Division - “Big Red 1.” Also, a member of the Faithorn United Methodist Church, Norway Lodge #362, Free and Accepted Masons, and charter member of the Northland Beagle Club. An avid hunter and fisherman, Slip lived a full Michigan life in the outdoors. He shot his first bear at age 16. A child of the Depression, he understood the value of a dollar. Slip earned $12 peeling pulp as an 11 year-old to buy his very first gun from the Sears catalogue. He was a passionate fisherman, especially loved fishing brook trout, and when asked where he caught some beautiful trout, Slip’s standard reply was “in a creek!” Slip will be remembered as a consummate storyteller of childhood memories, family adventures, and hunting and fishing tales. He was blessed with an exceptional memory that helped him relive his life through stories and was a font of knowledge, be it history, events, dates, people, and the natural world. He often spontaneously recited poetry at family gatherings, special events, and the Long Branch Bar. He is survived by his wife of 69 years, Bethel Carlson, daughters Amy (John) Brendemihl, Grace (David) Gorringe, Mary Beth Carlson, Nancy Carlson, Lorraine (Tony) King, Martha (Alan Yoshimura) Carlson, Lizabeth (Jim) Keller, and Trudy (Michael) Stachowiak, beloved grandchildren and great grandchildren, sister Vida Peters, and many dear extended family members and friends. The family would like to express their sincere gratitude for the special care given by the staff at the VA Hospital. The dedicated care and warmth they showed Slip were a blessing to the family. We thank God for the gift of his life and the many years we had to spend with him. Visitation will be held on Thursday, March 22 from 4-7 p.m. at the Ortman Funeral Home in Norway. Funeral Service will be held on Friday, March 23 at 11 a.m. at Faithorn United Methodist Church in Faithorn, with Pastor Irene White officiating. Interment will follow at Riverside Cemetery. Family request memorial contributions may be made to the Faithorn United Methodist Church or the Faithorn Fire Department.

The family of Stanley "Slip" Carlson created this Life Tributes page to make it easy to share your memories.

Send flowers to the Carlson family.