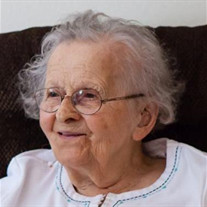 VULCAN- Stella S. Yourkoski age 101 of Vulcan, died Saturday, June 17, 2017 at Evergreen Assisted Living in Kingsford, MI. She was born on September 29, 1915 in Norway, the daughter of the late Andrew and Sophie (Chmielowski) Oleksy. Stella married John Yourkoski, Sr. on June 2, 1934 in St. Mary’s Church in Norway. He preceded her in death on May 21, 1969. Stella was a member of St. Barbara’s Church in Vulcan, St. Ann’s Altar Society, Legion of Mary and the Norway-Vulcan Senior Center. Stella was born and raised on the Oleksy farm. She was a wonderful story teller, regaling farming with horse power, climbing trees, going to school on “the bus” a horse drawn covered wagon and about getting electricity on the farm, along with many other stories. She was very proud of returning to High School in her later years and receiving her High School Diploma from Norway High School. Stella is survived by her daughters Viola (Willard) Stanchina of Norway, Mary (Robert) Hoheisel of Norway, Theresa (Ray) Saxton of Newton Falls, OH., Jean (Carl) Sims of Charleston, SC., Anne (Glenn) Wellman of Alpharetta, GA; daughter-in-law Perianne Yourkoski; 20 grandchildren; 43 great grandchildren; 2 great great grandchildren; sister-in-law Cecelia Oleksy; and many nieces and nephews. She was preceded in death by her sons John Jr. and James Yourkoski; brothers Julius, John, Joseph, Stanley, Anthony, Walter and Chester Oleksy; sisters Marie Zanon, Violet Zychowski and Sophie Breclaw. Visitation will be held on Friday, June 23 from 9-10 a.m. at St. Mary’s Church in Norway. The Mass of Christian Burial will be celebrated on Friday at 10 a.m. at St. Mary’s Church with Fr. Timothy Ekaitis officiating. Interment will follow at the Norway Township Cemetery. The family request that memorial contributions may be made in honor of Stella to St. Barbara’s Church in Vulcan.

The family of Stella Sophie Yourkoski created this Life Tributes page to make it easy to share your memories.

Send flowers to the Yourkoski family.