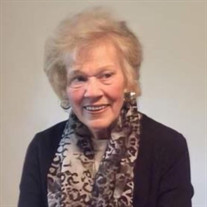 QUINNESEC- Thelma Marjorie Rodman age 95 of Quinnesec, went to be with the Lord on Sunday, May 15, 2022 at Maryhill Manor in Niagara, with her family by her side. She was born March 4, 1927 in Quinnesec, the daughter of the late Clarence and Angeline (Bianco) Johnson. Thelma graduated from Kingsford High School in 1945 and has been a lifelong resident of Quinnesec. Thelma met and fell in love with Frank Rodman from Kingsford. On October 14, 1950, they were married at St. Stephens Catholic Church in Loretto. They had 53 wonderful years together. Frank preceded her in death on November 30, 2003. Her first job was at Kresge’s making donuts, then she was promoted to head of the jewelry department. Thelma then spent some years raising her two daughters, after that, she went back to work at Montgomery Wards for 13 years until they closed. She then worked for 13 more years at Lolitas Closet. Thelma was a member of St. Mary’s Catholic Church in Quinnesec and the altar society, until its closing. For many years she taught faith formation. She then became a member of St. Mary’s Catholic Church in Norway. Bowling was one of her favorite things, she was on two different leagues. Thelma enjoyed going to the casino and was pretty lucky! She was a fantastic cook; her daughters were left with her great Italian recipes. She had a green thumb, her flowers and plants thrived. Frank and Thelma liked to travel and spend winters in Naples, FL. Thelma was a vibrant woman, she loved life and her family. She is survived by her two daughters Jill (Leo) “Bob” Sturm of Norway and Michele “Mikki” (Kath Keller) Rodman of Marquette; two grandchildren Matthew (Jill Minor) Sturm of Janesville, WI and Marisa (Jared Freeman) Sturm of Kingsford; her 6 precious great grandchildren Harley, Cambria, Olivia, Skyler, Grace and Jacen; sister-in-law Marge Robinson; brother-in-law William Rodman; many nieces and nephews; two dear friends Theresa Sampson and Kathy Berger. Thelma was preceded in death by two brothers Clarence and David Johnson; two sisters Tessibel Castelaz and Joyce Janeshek; brothers-in-law Clarence Castelaz, Jerry Janeshek, Arthur Rodman and Guy Robinson; and sister-in-law Lois Johnson. Visitation will be held on Friday, May 20 from 9:30 -10:30 a.m. at St. Mary’s Church in Norway. Mass of Christian burial will be celebrated on Friday at 10:30 a.m. at St. Mary’s Church with Fr. Marty Flynn officiating. Interment will follow at the Quinnesec Cemetery Family would like to say a special thank you to Kathy Jo Anderson for time spent with mom. Also, like to thank the wonderful staff at Maryhill Manor and Evergreen Assisted Living in Norway for their compassion and kindness shown to mom. Memorial Contributions may be made in Thelma’s name to your charity of choice or plant flowers or a tree in her honor.

QUINNESEC- Thelma Marjorie Rodman age 95 of Quinnesec, went to be with the Lord on Sunday, May 15, 2022 at Maryhill Manor in Niagara, with her family by her side. She was born March 4, 1927 in Quinnesec, the daughter of the late Clarence and... View Obituary & Service Information

The family of Thelma Rodman created this Life Tributes page to make it easy to share your memories.

Send flowers to the Rodman family.