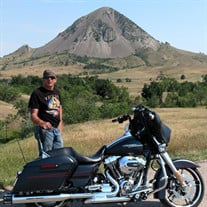 VULCAN - Tom Haferkorn, age 55, of Vulcan, passed away on the morning of April 16, 2022, with his loving wife Michele by his side at Marshfield Clinic, Marshfield, WI, after a brief, but courageous fight against Gastric Cancer. Tom was born on August 24, 1966, in Norway, the son of Joe and Nancy Haferkorn. Tom had two sisters Kathy and Suzie. He was a graduate of Norway High School’s Class of 1985. A couple years after graduation, he found his wife, Michele Haferkorn (Bal). Tom and Michele were married on June 16, 1990, in Vulcan, Michigan. They had three beautiful children, TJ, Mandy, and Nick. Tom worked construction after graduation before becoming a Millwright at Louisiana Pacific in Sagola. In 2001, he left LP to start his own carpentry business. Tom was an exceptional carpenter and owned Haferkorn Construction, LLC for many years. Every project he worked on is a testament to his character, craftsmanship and excellence that he upheld in his work and life. Tom was really a jack of all trades. Whether it was projects around the house, in the garage, on the bike or many other things. There was nothing he couldn't successfully tackle as family and friends surely know. Outside of work Tom raced IMCA modified for 17 years racking up many accolades in his tenure including 1992 Rookie of the Year at Shawano, WI and 2000 Rookie of the Year at Antigo, WI. He has feature wins at Antigo, Shawano, Seymour tracks in Wisconsin and also in Escanaba, MI. Tom was also featured on the cover of Turn4 racing magazine. Tom and his father Joe had many memories building and racing cars together. He loved racing with his dad. It's no surprise that his children were his biggest fans. Tom was also a coach to his three children in skiing and in life. He coached for Team Norway for several years. Countless hours were spent at the hill with athletes that he loved including his nieces. He often spoke of the memories he had of traveling to different race venues in the Midwest and Colorado for competitions with his family and friends. Tom was an avid outdoorsman, hunting, fishing, camping, grilling and spending time outside on his land. When Tom wasn’t with his family, he enjoyed riding his Harley with Michele. It was their happy place. His love of motorcycles led to traveling throughout the U.P. and other exciting destinations. Tom and Michele also met special, life-long friends known as their “biker family.” Tom is survived by his wife, person, and soulmate, Michele Haferkorn; his three children, TJ (Alexa) Haferkorn of Marquette, Mandy (Kyle) Larson of Green Bay, and Nick Haferkorn of Vulcan; Parents, Joe and Nancy Haferkorn of Norway; Sisters, Kathy (James) Malone of Hermansville and Suzie (Steve) Sheski of Norway; In-laws, Lenny (Kris) Bal of Hamilton Lakes and Annette (Scott) Meiner of Powers. He is also survived by many aunts, uncles, nieces, nephews, cousins, countless friends and pets. Tom was preceded in death by his father and mother in-law Leonard and Betty Bal; Grandparents Richard and Eleanor Haferkorn, Ray and Ruth VanGinkel and Caesar Groeneveld. Family will greet friends on Tuesday, April 26 from 11 a.m. – 1 p.m. at the Ortman Funeral Home in Norway. A Memorial Service will be held on Tuesday, at 1 p.m. at the Ortman Funeral Home with Fr. Marty Flynn, pastor of St. Mary’s Church in Norway officiating. A celebration of life will follow at the Knight Owl in Norway, MI, from 2 to 5:00 p.m. Interment will be at the Norway Township Cemetery.

VULCAN - Tom Haferkorn, age 55, of Vulcan, passed away on the morning of April 16, 2022, with his loving wife Michele by his side at Marshfield Clinic, Marshfield, WI, after a brief, but courageous fight against Gastric Cancer. Tom was born... View Obituary & Service Information

The family of Tom Haferkorn created this Life Tributes page to make it easy to share your memories.

Send flowers to the Haferkorn family.