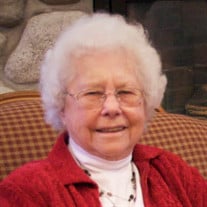 NORWAY- Violet J. Pearson age 95 of Norway, died Monday, October 24, 2016 at Evergreen Meadows in Norway. She was born March 8, 1921 in Seymour, WI, the daughter of the late John and Esther (Gulseth) Wagner. On June 21, 1947, Violet married Roy Pearson at the Mission Covenant Church in Foster City, MI, who preceded her in death on February 16, 1996. After graduating from Felch High School, she received her teaching certificate and later earned her Bachelor’s Degree in Elementary Education from Northern Michigan University. Violet dedicated her life to teaching children, starting her teaching career in Munising, then Foster City and taught for many years in the Norway-Vulcan school system, retiring in 1979. Violet loved children and loved teaching, whether it was academics or Sunday School. She touched many lives in the local areas through her generosity, kindness and laughter. She was very active in her church life. She loved singing alto in the choir and trios, playing piano, teaching Sunday School and kids’ programs, working in the kitchen, and serving in Covenant Women’s Ministries with her longtime friends Irene Welch and Lenore Soderlund. She was a gracious servant of the Lord. Violet enjoyed knitting, cooking and baking, laughter, but most of all time spent with family and friends. She was a hard worker all her life and did it selflessly. Violet and Roy thoroughly enjoyed watching their children, grandchildren and great-grandchildren in all the many activities they were each involved in over the years. From baseball games to dance and piano recitals to band concerts to a “mean” game of UNO, all were truly loved by them both. Violet is survived by her sons Gerald (Sherry) Pearson of Wausau, WI and Glenn (Jo Anne) Pearson of Gladstone, MI and her daughter Mary Lynn (David) Verley of Norway, MI. She is also survived by her grandchildren Joshua (Jessica) Pearson, Scott Pearson, Carolee Pearson-Clark, Amy (Josh) Morgan, Jason Verley, Pamela (David) Westphal, and Mindy (Andy) Mokszycke; and great-grandchildren Alicia, Connor and Andrew Morgan, Toby Verley, Zachary and Spencer Pearson, Madelyn Westphal, and Justin Rock; sisters Alice Badgett and Barb (Karl) Bosk, sisters-in-law Ruth Wagner and Ruth Rahm, many nieces, nephews and cousins; many friends, including her wonderful caregivers at Evergreen Meadows. Violet is preceded in death by her husband Roy, parents John and Esther Wagner, father and mother-in-law Henning and Anna Pearson, brothers Richard Wagner and Robert Wagner, sister Opal Richards, brothers-in-law Jack Badgett, John Richards and Lawrence Rahm, and great-grandson Tristin Morgan. Family will greet friends on Wednesday, October 26 from 10-11 a.m. at the Mission Covenant Church in Foster City. A Memorial Service will be held on Wednesday at 11 a.m. at the Mission Covenant Church with Pastor Richard Yates officiating. Interment will follow at the Foster City Cemetery.

The family of Violet Josephine Pearson created this Life Tributes page to make it easy to share your memories.

Send flowers to the Pearson family.