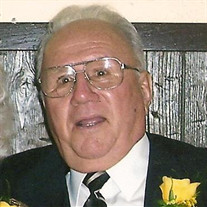 WALTER GUNVILLE VULCAN- Walter F. Gunville age 82 of Vulcan, died Sunday, October 18, 2015 at his home in Vulcan. He was born in Niagara, Wisconsin on July 4, 1933 the son of the late Delora and Olga (Skaja) Gunville. Walter served his country in the U.S. Army during the Korean Conflict as a medic, where he was awarded the Korean Service Medal and the Bronze Service Star. He married Veronica Moraska on November 24, 1955 in St. Barbara’s Church in Vulcan. She preceded him in death on November 28, 2014. He was a member of St. Barbara’s Church in Vulcan, a charter member of the Norvulet Post #4581 V.F.W., and the Vulcan-Norway-Loretto Lions Club. Walter worked at Grede Foundry for 18 years and then The Markell Company roofing for the next 18 years before retiring, he maintained the East Vulcan playground for years, was an avid gardener and wood maker, he enjoyed cooking the chicken for years at the St. Barbara’s picnic, loved to go spearing for Northern, hunt and trap, feed the birds, going to camp, picking mushrooms, feed the deer, and watching the grandchildren and great grandchildren on Face Book with Rosalie. Walter is survived by his children John (Shelly) Gunville, Roger (Kelly) Gunville, Walter Gunville, Rosalie Sonnenberg and Natalie Gendron; grandchildren Emily Gunville, Shannon (Brad) Suhski, Adam Gunville, Jennifer (Chad) Loveless, Roger Lee (Rosie) Gunville, Cody, Kaylee and John Michael Gunville; great grandchildren Katelynn, Kelsi, Tristan, Dalton and McKenna; sister-in-law Marge Gunville, Elizabeth Stanchina, Margaret Moraska and Carol Moraska; many nieces and nephews. He was preceded in death by his son-in-law Edward Sonnenberg, brother Robert Gunville and sister Mary Ann Ehlers. Visitation will be held on Monday, October 26, from 9-10 a.m. at St. Barbara’s Church in Vulcan. A Memorial Mass will be celebrated on Monday, at 10:00 a.m. at St. Barbara’s Church with Fr. Timothy Ekaitis, presiding. Interment will be held at the Norway Township Cemetery. Condolences to the family of Walter may be expressed online at www.ortmanfuneralhome.com Arrangements announced by the Ortman Funeral Home in Norway.

WALTER GUNVILLE VULCAN- Walter F. Gunville age 82 of Vulcan, died Sunday, October 18, 2015 at his home in Vulcan. He was born in Niagara, Wisconsin on July 4, 1933 the son of the late Delora and Olga (Skaja) Gunville. Walter served his country... View Obituary & Service Information

The family of Walter Francis Gunville created this Life Tributes page to make it easy to share your memories.

Send flowers to the Gunville family.