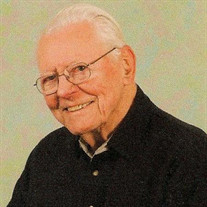 PEMBINE, WI.- Dr. Wayne A. Covioux age 88 of Pembine, died Monday, March 13, 2017 at Dickinson Co. Memorial Hospital in Iron Mountain, MI. He was born on September 23, 1928 in Norway, the son of the late Frank and Jennie (Anderson) Covioux. Wayne graduated from Manitowoc High School and served his country in the U.S. Army from August 27, 1948 to August 26, 1952. He married Alice Hendrickson on December 24, 1954 in Manitowoc, WI. In 1956 they moved to Oshkosh, where Wayne opened his optometric practice. Wayne was a life member the Wisconsin Optometric Association, life member of the American Legion Post in Oshkosh, a charter member of the Oshkosh-Lakeshore Lions Club, life member of the NRA, life member of the Jake Menghini Museum in Norway; he was a man of deeply rooted faith and a very active member of Grace Evangelical Lutheran Church in Pembine and a very patriotic American. Wayne enjoyed hunting, fishing and playing golf. He liked playing pinochle and cribbage, going on pontoon rides and enjoyed having dinner parties at his house on the river. He is survived by his sisters-in-law Bernice Johnson of Ocala, FL, Betty (Roy) Schurdevin of Fargo, ND and Barbara (Jim) Mattfeld of Frazee, MN; many nieces and nephews; and his Menominee River family and many friends. Visitation will be held on Friday, March 17 from 9:30-11 a.m. at the Grace Evangelical Lutheran Church in Pembine, WI. Funeral Services will be held on Friday, at 11 a.m. at the Grace Evangelical Lutheran Church with Pastor Jeremy Nausin and Pastor Gene Wickman, officiating. Interment will follow at the Norway Township Cemetery. The family request that memorial contributions may be made to a memorial established in Wayne’s name.

The family of Wayne Anthony Covioux created this Life Tributes page to make it easy to share your memories.

Send flowers to the Covioux family.