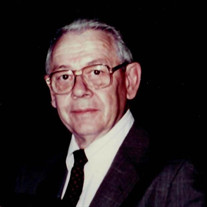 VULCAN- William R. Bray age 90 of Vulcan, formerly of Indianapolis passed away Sunday, February 17, 2019 at St. Vincent Hospital in Green Bay, WI. He was born on January 29, 1929 in Vulcan, the son of the late Martin and Victoria (Piasta) Bray. William graduated from Vulcan High School in 1947, where he was a star basketball player. He attended Michigan State University for one year after high school before being drafted by the U.S. Army on December 7, 1950. William joined the 25th Infantry Division, 2nd Battalion, 14th Infantry Regiment and did his training at Fort Leonard Wood, MO. As a Sergeant 1st Class, William, served on the front lines of the battle field during the Korean Conflict and experienced some of the coldest winter months. His war experiences where very brutal and he saw many of his fellow soldiers killed. After leaving the service he moved to Hammond, Indiana where he met and married Stella M. Kucharski. From their he relocated to Indianapolis and became branch manager for Superior Tea and Coffee Company where he worked for nearly 50 years. William loved the outdoors, especially fishing, and spent many quality hours fishing with his son Jeff. He was also an avid gardener and enjoyed growing his own fresh fruits and vegetables. In 2014 William rescued a little black cat that showed up on his door in Indianapolis and their bond became very special, he called her his little monkey. William is survived by his sons Robert (Carmen) Bray of Snellville, GA., Gary (Cathy) Bray of Indianapolis and Jeff Bray formerly of Indianapolis, now residing in Vulcan; 6 grandchildren; 9 great grandchildren; many nieces and nephews. He was preceded in death by his wife Stella on January 21, 1997; son Patrick Bray; brothers Benedict J. Bray and Raymond Bray, who was a former All-Pro Football player for the Chicago Bears from 1940-50; and his sister Kay Bray. Visitation will be held on Wednesday, February 20, from 2-4 p.m. at the Ortman Funeral Home in Norway. Funeral Services will be held on Wednesday at 4 p.m. with Fr. Timothy Ekaitis, pastor of St. Barbara’s Church officiating. Interment will be held on Saturday, March 2 at Calvary Cemetery in Indianapolis. The family suggest that Memorial Contributions may be made to the Almost Home Animal Shelter in Quinnesec.

The family of William Robert Bray created this Life Tributes page to make it easy to share your memories.

Send flowers to the Bray family.